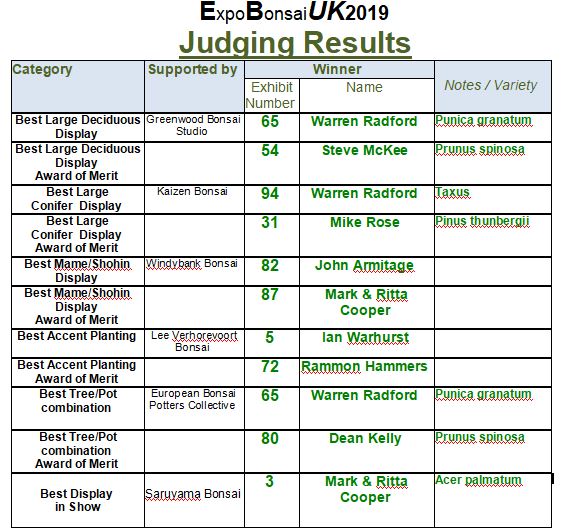 7th April 2019  2nd Expo Bonsai UK Show
Show report
On a mild April morning in the streets of Harlington traffic started blocking early as vehicles full of trees, pots and stands assembled. ExpoBonsai 2019 was about to start and following last year’s successful event there was a buzz in the air. People set up as the show for individual displays assembled smoothly and as before the 30+ traders made ready to sell their wares. With the smell of bacon in the air the show opened and a record number of visitors made their way in to study all that was available. This year even saw a coach turn up having made the trip down from the Midlands.
There were a few small changes but last year’s very successful show meant that it was fine tuning rather than a new format.
Catering this year was handled by ‘Derek’s Diner’ though as before both the exhibitors and traders enjoyed a free breakfast butty and coffee. All agreed that this change was a good one, the previous volunteers did a great job but the show’s success has meant it is too much to ask them now.
On entry visitors were greeted by a row of very large, high quality trees that set the scene for the quality throughout the show.  Diversity ,as before, was in play with everything from very old Japanese imports through the entire spectrum, yamadori and nursery stock to old garden material. Emphasis was placed on each exhibitor’s total display and as with the trees these varied both in style and size. The common factor though was the quality as the effort made by all was immediately apparent. Sickness and accidents had seen the loss of a few exhibitors but readily offered replacements took their place.
Traders offered everything needed and all reported a good buying crowd with a great atmosphere throughout the show.
As before the 6 main awards had been sponsored already, see the list for details, but this year there were 2 additions. The handmade trophies skilfully crafted again by Esther Griffiths were kindly sponsored by MojoBonsai, Tony Tickle’s company specialising in bonsai workstations. Secondly Andrew Pearson kindly supplied a handmade pot especially as a trophy for ‘most innovative design’. This trophy went to a wonderful juniper on wood composition which stood out like a ballerina on point and caused visitors to shake their heads as they tried to fathom out just how Russ Farley had achieved that balance!
So did it work? The atmosphere was simply superb with a very friendly feel to the day. Exhibitors had travelled from far and wide and one trader, Lotus Bonsai Studio, had even made his way up from the French/Spanish border. The food quality and selection was appreciated by all and the diner area made a good meeting point.
Will it happen again? April 5th 2020 is the date. If you wish to exhibit submissions will open shortly. See you there!
Back to Top